Among car enthusiasts, the terms wing and spoiler are often used interchangeably. This is an error. Not only are the definitions of a wing and a spoiler different, but the purposes of each are different as well. Below we will go over the basic terms and functions of each and how to identify them. BMW models are famously known for incorporating both spoilers and wings in their models from old to new.

How can I determine which design is a wing and which is a spoiler? 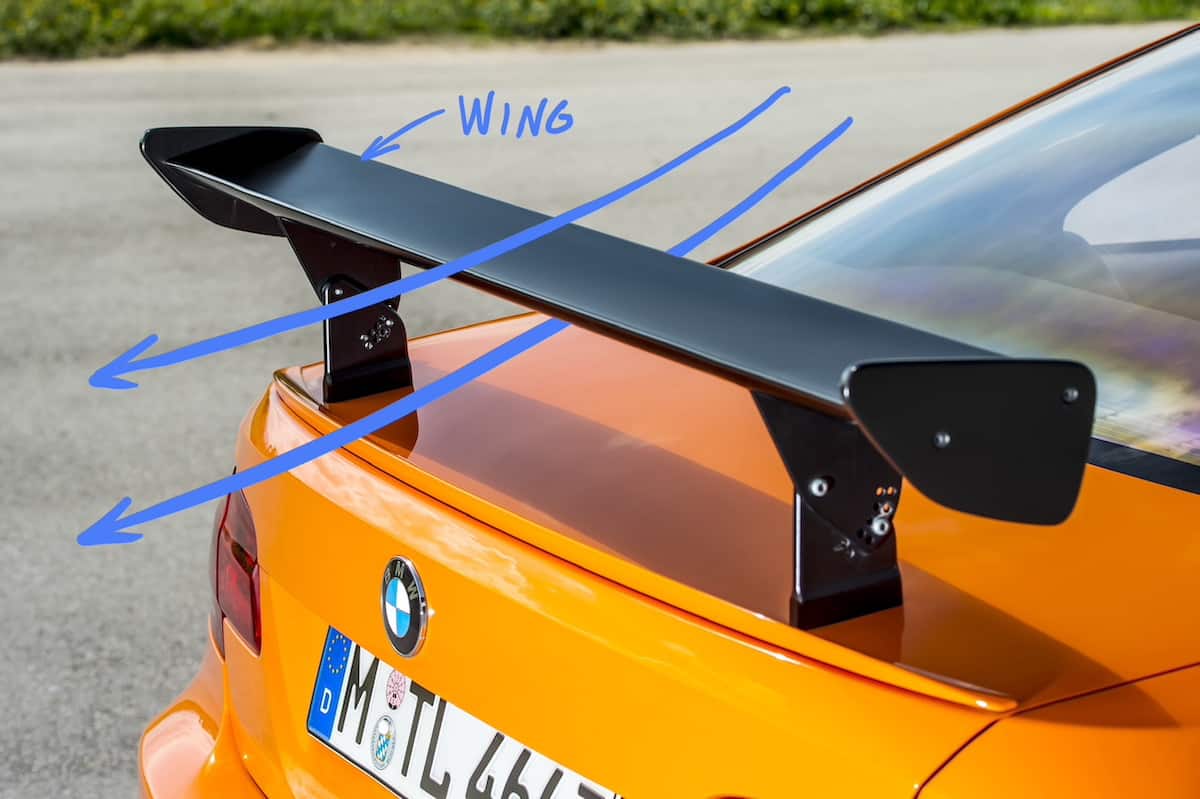 What is the purpose of a rear wing?

A rear wing on a BMW has one main purpose, to provide downforce. A wing on an aircraft provides lift, if you flip this wing upside down and mount it to a car, it provides lift in the opposite direction causing downforce. The wing mounts in the rear of the vehicle to push down optimally on the rear wheels, providing as much traction as possible.

The most hardcore, track-focused BMW models are typically installed from the factory with a wing. The F82 M4 GTS, E30 M3, E46 M3 GTR, and E92 M3 GTS are just a few of the models which BMW requires the most use of downforce.

What are the disadvantages of a rear wing?

A rear wing provides a significant amount of drag which will decrease top speed at the cost of adding downforce. The added structure added to the rear of the vehicle is sticking up in the airflow of the vehicle and pushing against the forward motion causing inefficiency. This inefficiency can lower the top speed by 15% or more.

What is the advantage of a spoiler?

The main purpose of a spoiler is to reduce drag by redirecting airflow around a vehicle or more simply “spoil” the air. 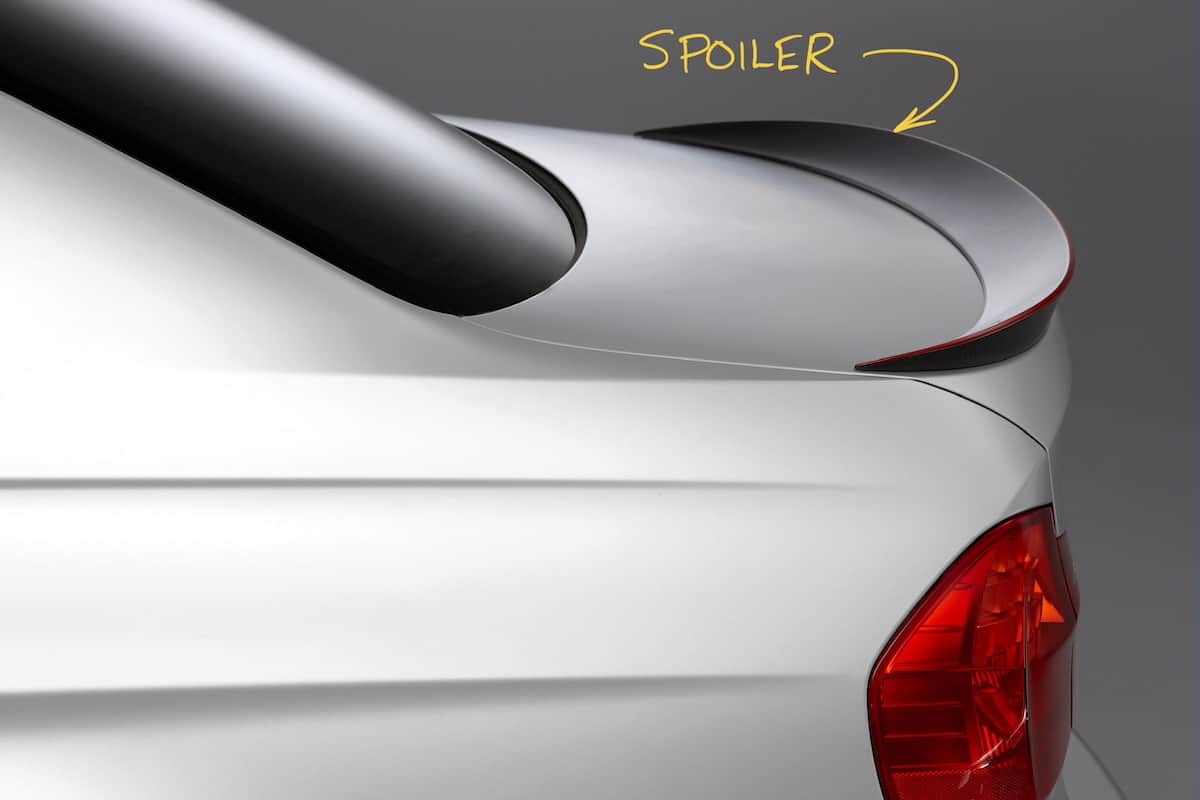 Adding a spoiler to the rear trunk creates an air pocket of circulating air behind the rear glass. As this air circulates, the new air flowing over the top of the roof can smoothly pass over the vehicle decreasing drag and increasing efficiency. See the below image for clarification. 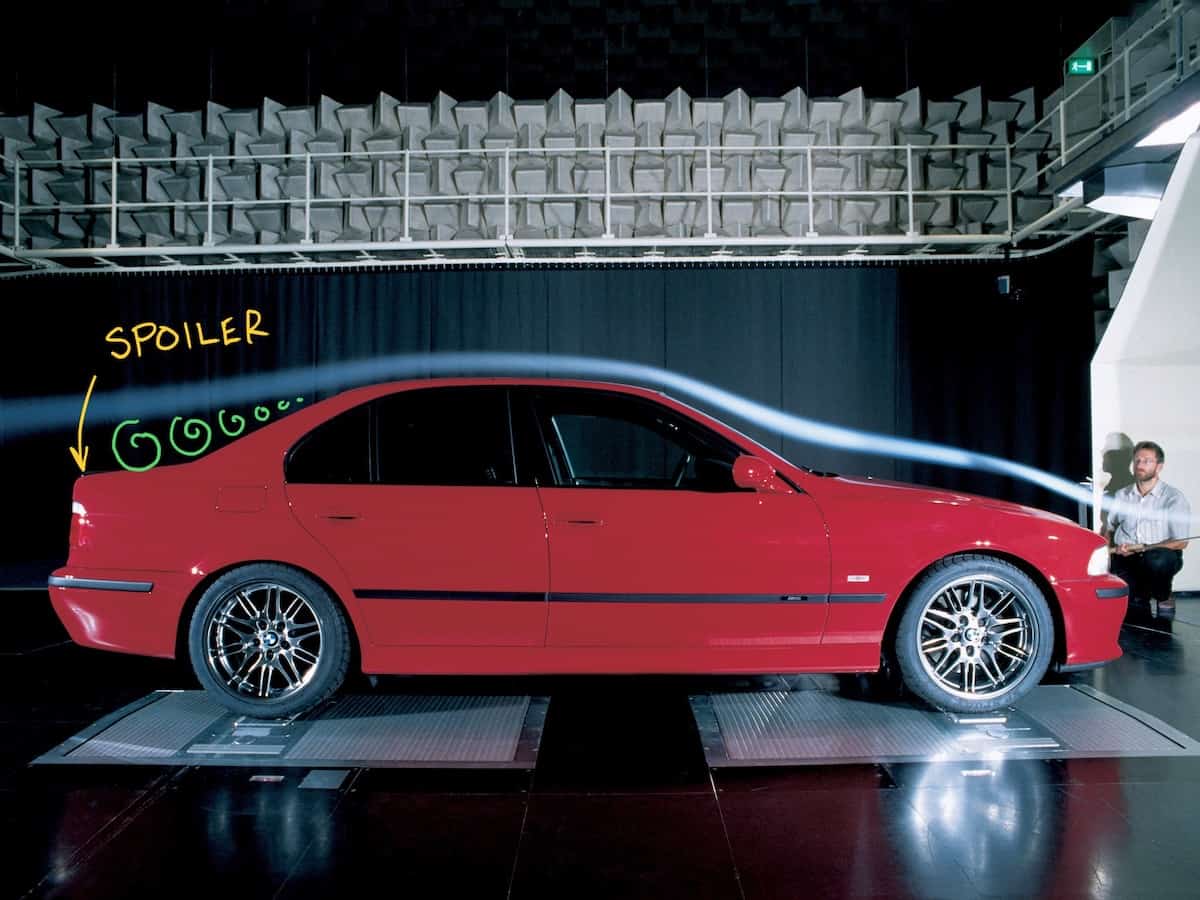 Unlike a wing, which increases drag, a spoiler decreases drag. Decreasing drag and streamlining the airflow around the vehicle will increase high-speed stability.

Can you have a wing and a spoiler at the same time?

Yes, the E36 M3 LTW and GT are great examples of this. A spoiler and a wing can work independently from each other providing both downforce and reduced drag. See the images below to identify BMW designs that incorporate both a spoiler and wing.

Should I add a wing or spoiler to my vehicle?

Unless you have proven evidence through wind tunnel testing that the modification you are adding is effective, no. BMW engineers spend countless hours perfecting the design of wings and spoilers on their vehicles. Adding a wing may look cool, but it is likely not adding any real function. Wing shape design, height, angle, and mounting position are all critical factors that are tested in a wind tunnel with millions of dollars worth of equipment. We recommend sticking with OEM BMW designs which proven their effectiveness in functionality by the BMW engineers.

Do you know what a rear diffuser does?

Where can I learn more fun facts about BMW?