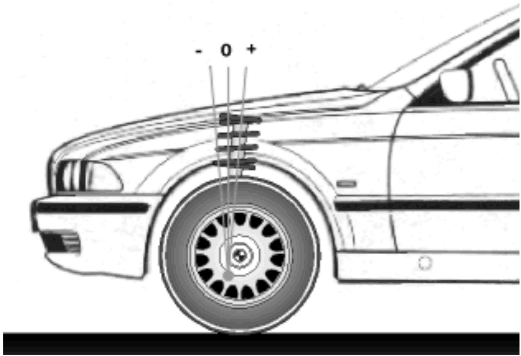 What is wheel caster?

When talking about suspension geometry, wheel caster is the forward or rearward tilt of the steering axis centerline as viewed from the side of the vehicle and is measured in degrees from vertical. Caster is a directional control geometry angle that helps keep the vehicle moving straight ahead. A forward tilt would yield a negative caster where a rearward tilt yields a positive caster. Wheel caster on motorcycles, more specifically choppers, helps us visualize how an extreme example of wheel caster appears. The caster or "rake" of the front wheel is very prominent on chopper bikes.

Every single BMW that rolls off the manufacturing line leaves with a positive caster. Always. There are many benefits to having a positive wheel caster, however, the most important is having stability at high speeds. Other benefits include ease of steering wheel return after cornering and enhanced cornering characteristics due to increased camber as the wheels turn.

To help visual the increased positive wheel caster benefit, imagine a motorcycle with its forks (or steering axis) horizontal to the ground. As the wheel turns in either direction the direction of the motorcycle would not change, however only the camber does. As you decrease the rake back to a more realistic setting of 3 - 5 degrees, turning the wheel results in direction change of the vehicle with slight added camber as you get closer to full steering lock.

What is a side effect of positive caster?

The only real "downside" with positive wheel caster is that the steering wheel is harder to turn at slower speeds such as maneuvering around a parking lot. This happens to be a prominent feel of older BMWs, it gives the car a tight and heavy feeling. BMW received feedback complaints about the heavier feel from older BMW models so BMW introduced a Servotronic system to help change the feel of the steering wheel at different speeds. This system will tighten and higher speeds and loosen at lower speeds.

The caster angle on a BMW does not feature adjustability built in. When an alignment is performed, caster is still measured however because if the is caster out of spec it will alert the technician that suspension components are worn out and need replacing. Some after market suspension kits do allow for caster adjustment.

Learn about wheel offset and why it is important.