What is the difference between horsepower and torque?

Horsepower and torque are two terms thrown around the car community quite often. But not many people truly understand what torque and horsepower mean. It can be a very complex subject matter to understand in technical terms but we will explain them in a general automotive sense before going into slightly greater detail.

Torque is a twisting force created by the crank shaft. This force is then transferred to the transmission, drive shaft, differential and ultimately the vehicle's wheels.

A practical example of torque:

Applying a force to a lever arm at a certain distance creates torque. Imagine holding a 1 foot long wrench on a nut and applying 10 lbs of force to the end of the wrench with your hand. This force (10lbs) applied at a distance (1 foot) creates 10lb-ft of rotational force, torque, to the nut.

The above equation is the beauty of breaker / cheater bars. If you are having trouble removing lug nuts from a car using a 1-foot long wrench handle, use a breaker bar (or wrench) with a 3-foot handle and the torque increases three times with the same force you applied with the 1-foot long wrench.

To adapt the above example in terms of engine torque, imagine the force being pushed down as the piston and the socket wrench arm being the crankshaft arm. The socket represents the rotational center of the crankshaft, producing the torque.

How can you increase engine torque?

Enlarging the bore and stroke also increases engine torque. These improvements will apply a greater downward force on the crankshaft increasing the rotational force.

The most basic definition of the term horsepower is rate at which “work” is done. The origin of the term comes from quantifying how much “work” one needs to lift 33,000 pounds one foot in one minute. In an automotive application, the “work” needed is to move the car forward.

Let us make a comparison between two exact cars being driven a quarter mile. Moving the car at a slow rate requires less “work” than moving the same car quickly the same distance. Although the distance and the cars are the same, the rate of work needed to accomplish the task is different.

A practical example of horsepower:

Think of it in terms of people supplying the power instead of the engine supplying the power. For two average people, pushing a car a quarter mile in 30 minutes is a realistic task. To push the car a quarter mile in 3 minutes those same two people would have to “work” much harder to get the job done. The more “work” needed to accomplish a task, the more power is needed.

Horsepower can be more easily understand by looking at a standard dynamometer chart like the one seen below. As engines RPM changes, horsepower and torque changes. A maximum power output of 242hp at around 6,300rpm (but torque generated equals 200ft-lbs) although peak torque of 232lb-ft is achieved at 4,400rpm (but the engine outputs only 190hp). 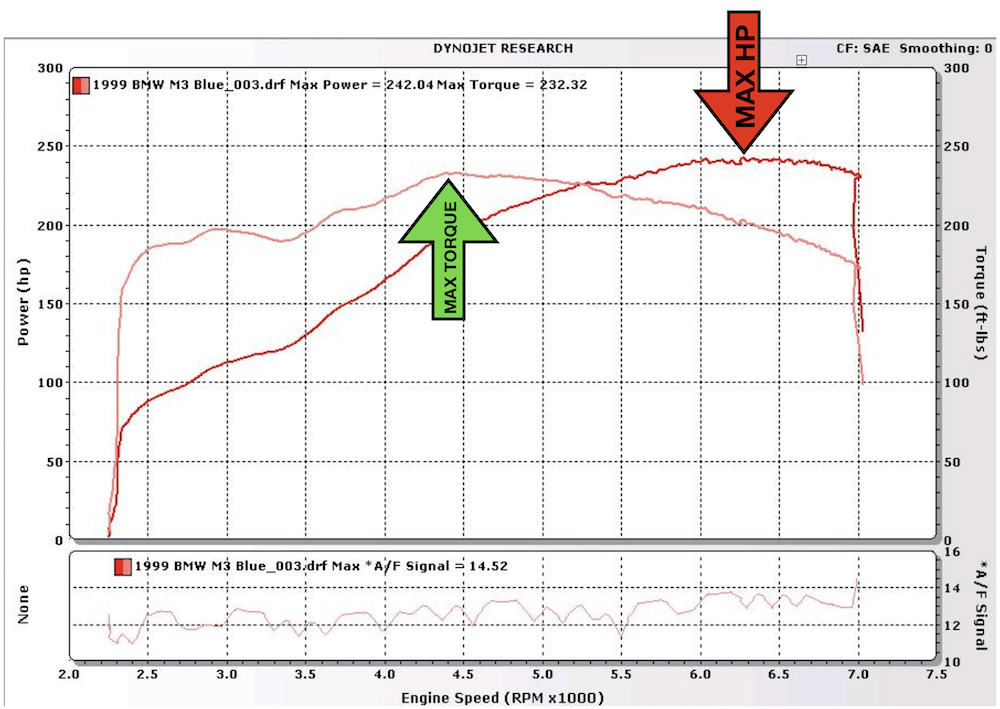 Peak torque on the dynamometer chart represents the greatest rotational force the crank shaft produces.
Peak horsepower on the dynamometer chart indicates the RPM at which the engine creates the most amount of work it can do. It is important to note that when manufacturers give out horsepower and torque values, these are the maximum values reached at a particular RPM. These values are not the horsepower or torque values created at any given time.

What is the bottom line?

To learn the IMPORTANCE OF TORQUE ON NUTS AND BOLTS, make sure to click HERE