What is BMW TwinPower Turbo Technology?

Since the N55 engine, BMW has been naming many of their engines “TwinPower Turbo”, this is a bit of a marketing trick. The predecessor N54 engine was actually a “Twin Turbo” engine. There are big difference as well as advantages and disadvantages of both setups. We will ease into the complex topic of turbos by defining some terms and functions of the turbocharged system.

What is the basic difference between TwinPower Turbo and TwinTurbo Power?

In both designs, the exhaust manifold is evenly split into two headers based off of firing order. The TwinPower Turbo (also called twin scroll turbo) is a single turbo powered from pairs of cylinders in an alternating sequence from two exhaust down tubes. The Twin Turbo Power has two turbos, each fed by one of the two exhaust down tubes. Reference the below image to visualize the TwinPower Turbo technology. Although the example below is from a 4 cylinder engine, the same design can be applied to 6, 8 and 12 cylinder motors. 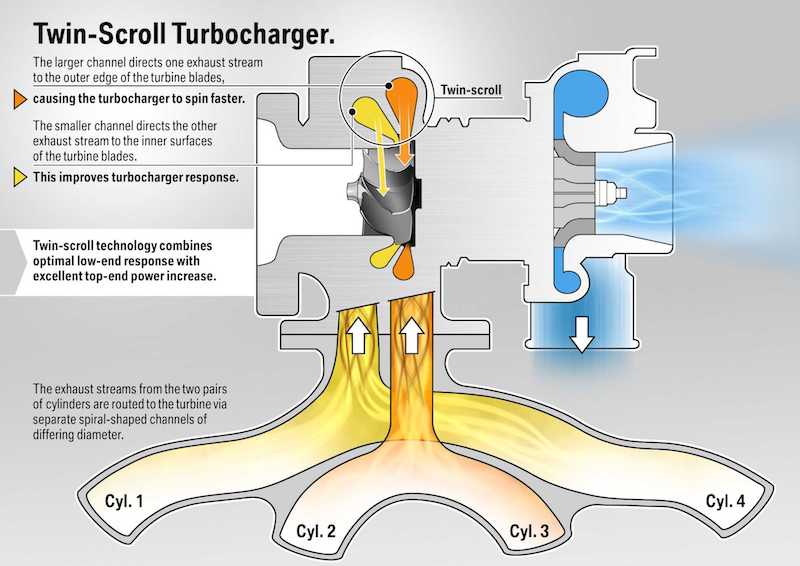 Now that the basic idea is explained, we can further go into detail of why BMW switched to the TwinPower design and the advantages of this setup over the Twin Turbo Power design.

What is a turbocharger?

A turbocharger is a device that increases engine power output and efficiency of an engine by compressing air into the combustion chamber through an exhaust powered turbine. The more air the engine takes in, the more fuel it can take and more power it makes.

What is the purpose of the exhaust manifold in a turbo system?

The exhaust manifold is a set of tubes bolted on the exhaust side of the engine block which collects the exhaust gases from each cylinder and channels them into a down tube. This channeled exhaust gas is fed through the turbocharger turbine blades, which feeds compressed air into the motor. The exhaust manifold must be designed in a way to quickly and efficiently remove the gases from the engine. The tubes coming off the manifold can be created with equal or unequal length tubes, both with advantages and disadvantages of each design.

Car manufacturers want to keep the engine design as compact as possible to save weight and overall size, however, the performance of the vehicle is hindered as the result of unequal tube length. The engine’s pistons create a series of pressure pulses based on the firing order creating a natural process called scavenging.

Scavenging is the process of pushing exhaust gases out of a cylinder and naturally drawing in a fresh dose of an air-fuel mixture for the next cycle. This is an essential part of a smooth running engine. Pressure “pulses” are naturally created from the firing order of the cylinders which push exhaust gases out the manifold in a high-pressure pulse. This high pressure naturally draws a low-pressure pulse out from the combustion chamber continuing the cycle by sucking in new air. The desirable trait of scavenging can quickly turn undesirable if the exhaust manifold tubes are of unequal length. A negative effect of reversing can occur.

Reversing, or reversion, is when the flow of exhaust gases is disrupted to the point where it can reverse direction and actually flow back into the combustion chamber contaminating the fresh combustion gases with exhaust gases. There is a small overlap of the valves where an intake and exhaust valve are partially open at the same (even more so on race engines). This allows for the possibility of interference as the exhaust gases fight each other to be expelled from the cylinders.

What are the are the side effects of reversion?

How do twin scroll turbos fix the possibility of reversing?

Twin scroll turbo design still contains a single turbo but the turbine is fed through two different inlet tubes (see pictures below for further clarification). The natural process of pulsating is fixed by equally separating exhaust tubes from the cylinders which naturally interfere with each other creating the pulsing effect. This creates a much smoother flow of exhaust gases. This increases efficiency of air entering the turbo as well as the quality of air entering.

Because twin scroll turbos are more efficient at cramming more air into the engine, a higher ignition delay can be programmed into the engine. Leaner air-fuel mixtures result from cooler cylinder temperatures and lower exhaust gas temperatures. This improves fuel economy by as much as 5 percent and turbine efficiency by 7 - 8 percent.

What are the advantages of single scroll turbocharger?

What are the disadvantages of single scroll turbocharger?

What are the advantages of Twin Turbo?

What are the disadvantages of Twin Turbo?

What are the advantages of TwinPower (Twin Scroll) turbo system?

What are the disadvantages of TwinPower (Twin Scroll) turbo system?

Circa 2016 many BMW V8 engines went from Twin Turbo Power to TwinPower Turbo. V8 engines such as the N63TU went to dual twin scroll turbos. This adds another layer of confusion as the engine setup twin turbo but with twin srolls on each turbo.

What is the bottom line? 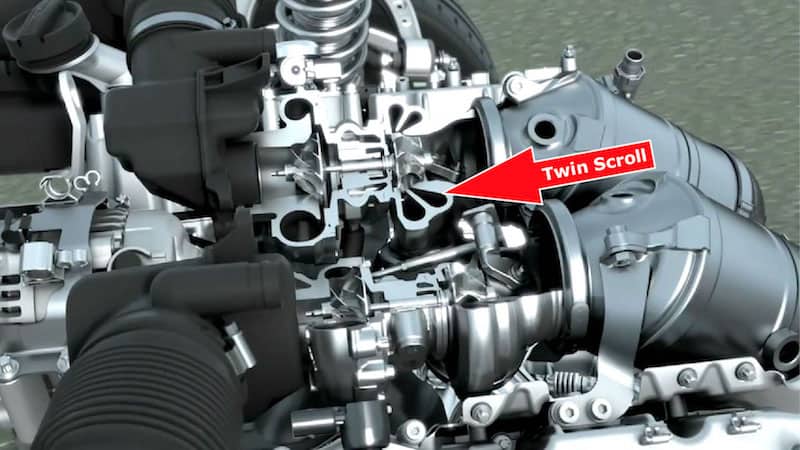 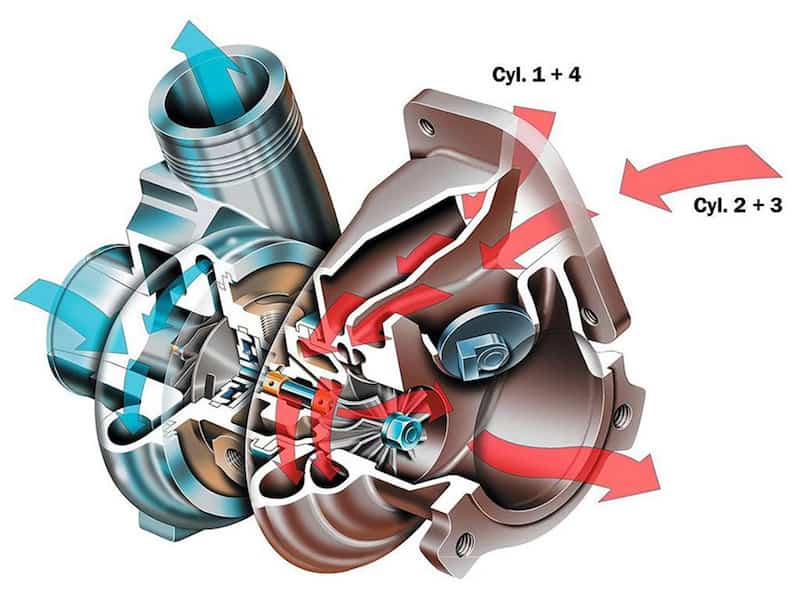